Delhi traffic kills, virtually. To avoid the torture, I start early at 7 a.m. Though my destination, Zorba the Buddha, is only 35 km, I take 70 minutes to reach. But still cool, going by Delhi’s standard.

Zorba is an oasis in the concrete and car jungle, one among several farm houses in the area.  As one enters the gated complex, just off Ghitorni Metro Station, it’s far from the madding crowd. The difference is conspicuously visible. It soothes the nerves. One feels, the drive all the way has been worth it.

Zorba, in fact, is an exotic location for really exclusive meetings – rustic, green and charming. Everything has been tastefully done with sense of aesthetics. This 3-4 acre farm land has been converted into conference facility with 4-5 halls of different capacity and about 15 rooms for lodging. It’s a full boarding place. Good part is, it is vegetarian only but with immense variety – it’s not dal-roti only. Bad part is the timings for food are very rigid. Dinner at 7 p.m. is too American!

We are organising a three-day international ‘dialogue on transition to clean energy’. I am going to stay here for two nights. Incidentally, I have been allotted a three-person sharing room. Frankly, I love privacy but there is limitation of number of rooms. I check into the room and find I have a choice as the other two occupants have not arrived as yet. As luck would have it, the arrangement in the room is two beds on the main floor, and there is a mezzanine floor, half the room size, with a queen bed. It’s as good as private room. Though I have knee problem, I do not mind a flight of steps. I just grab this exclusive part of the room and feel happy.

About half a dozen international participants and about a dozen Indian participants have reached by last night and settled at Zorba. I find, some friends enjoying morning tea. I meet Ravi from Vizag and Ramesh from Goa. I chat with them for few moments. I notice, some distance away, three international participants are also enjoying tea. I know two of them, Todd and Ron. I am just thinking of reaching them, when, Todd walks toward me. We smile at each other, shake hands and exchange pleasantries.  Soon, Todd introduces me to the new guest, “Meet Trip, president of EJ and my boss.” I extend my hand, warm hand shake, its huge hand! While Todd joking adds “He has come to keep an eye on us!” I notice Trip is tall, past 6 feet, innocent looking attractive face. He is wearing a sweet smile. He is old but does not look his age. I develop a kind of affinity right away. 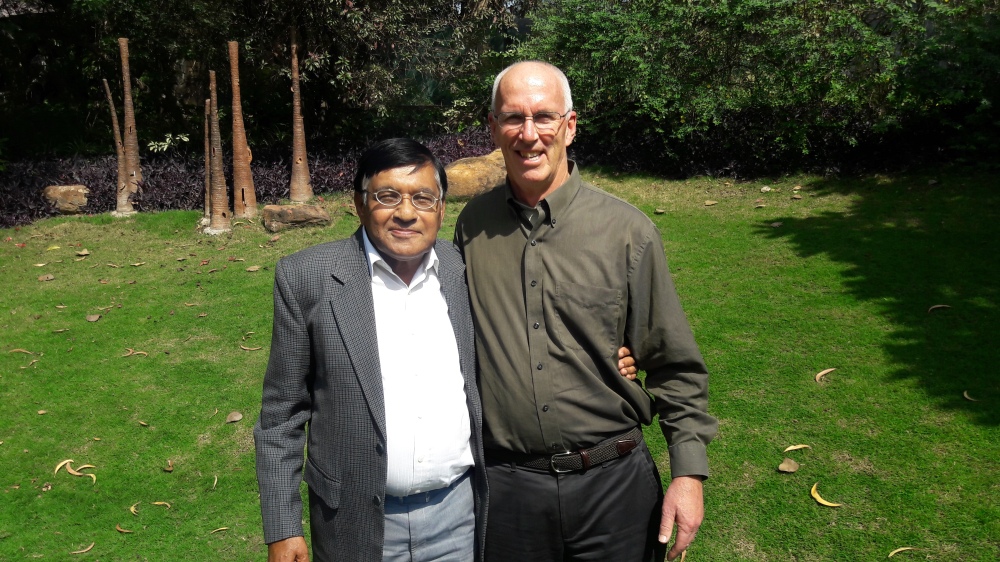 I decide to meet participants formally and informally as they arrive for breakfast which starts at 8.30. The breakfast is from 8.30 to 9.30. I grab a plate and eat leisurely while participants come and go and I meet most of them here. Interesting part of the arrangement is there are no tables for meals – chairs are put in a circle in a lawn. About dozen of us are sitting around and talking. Most of the participants are known to me. We have organised such consultations at this very place about half a dozen times during last 4-5 years.

Trip is also sitting here. He hears a bird calling persistently, probably, wanting not to be missed. He asks me, “This looks like an interesting bird. Can we see this? What species?”

I tell him, “It’s Crimson-throated Barbet, also known as Coppersmith, more because of its habit of persistently calling throughout the day, took, took, took…” I wonder at the energy level! I know the bird is very difficult to spot in spite of one knows from where it is calling – remains hiding in the foliage. I try to help Trip but in vain.

Lisa Evan joins. She is fan of my blog, ‘Glimpses of Wilderness’, and never stops praising it and even passing on some of the postings to her colleagues. She informs Trip in detail about my naturalistic interests and keen involvement in wildlife watching. I am rather overwhelmed by the praise and sheepishly say, “Oh! Nothing great, I am just sharing some of my experiences in nature.”

Trip is now quite seriously interested. He wants to subscribe the blog. I tell him, “It’s free and open access blog.” He later Google and locates it.

During the stay at Zorba we continue of talk, off and on, about birds around. I tell Trip that there would be about two dozen species here. He notices a bird in the open grassland area. I tell him, “It is a lapwing, Red-wattled Lapwing.” It’s amazing that peacocks are found roaming around the complex and we can hear them frequently.

Trip and I decide we will try a formal birding in the Zorba complex itself for first half hour of the breakfast time i.e. 8.30 to 9.00, on our last day of the conference. Todd gets a hint of it and suggests he is joining too.

I for one, get ready by 8.00 to be sure that there is no rush and I am ready to straight join the conference later. This means, I am all set for birding in a formal dress meant for conference. I am old school guy and like to wear formals for meetings.

Trip & Todd join on dot, equipped with binoculars. There are old trees in the complex, more so on the boundary. Natural bushy growth, decorative plants, bamboo, palms…  The land is not plain – it’s undulating, hillocks here and dips there, and small water bodies. All this increases the potential for birds. We start from the boundary from the rooms’ side. Most conspicuous of course, is peacock, calling shrill from roof top. Across the boundary, we notice a Red-wattled lapwing, in fact one more join it. Todd takes a good look; wants to make sure that the red wattle is there. I explain an interesting part of lapwing ecology, “it nests on the ground and in case some predator approaches the nest, it would drop one wing, appear to be injured, and walk away from the nest and attract the predator towards it and flies away when the animal is at a safe distance from the nest. Smart of it!”

Caw, caw, cav, cav… “Can you hear this? This is Crow Pheasant. (I see the literature later, and it more famous as Greater Coucal these days.) It’s larger than crow, black but with rust colour wings and back. It’s found in the bushes and often comes out in open area near the bushes.” We try hard to locate it but fail. Nevertheless, I assure my friends to count this in.

“Oh! There’s a quail,” Todd points out. In fact a pair, just at the edge of a bush. On good look, we all notice that this is much larger than quail and I identify this as Grey Partridge (Now the species in India is called Grey Francolin). I have not been expecting to find this but happy to see the pair.

In the meanwhile, one, less than a finger size bird is humming in a blooming tree– I ask friends to look whether it has a long curved beak. We find the bird is female of Purple Sunbird. Male is very easy to identify with radiant and bright blue-purple-black colour while female is drab and dull coloured. Trip is excited to know about the tree species as well. I tell them it’s Bauhinia (Kachnar). Soon all the leaves would be gone and tree will be entirely flowers only, a sight without parallel.

Common Myna and rock pigeon are all over. One does not feel like counting them in. Several Pariah Kites (Small Indian Kite) are circling overhead.  I notice a Black Drongo for a moment but before friends could notice, it flies away. Trip tells me, “No worry, I have seen it yesterday.”

We reach a Ficus (peepal) tree in fruiting. It’s busy place. I suspect one grey hornbill in upper canopy but not sure. The tree is packed or sure with Large Green Barbets maybe 25-30 of them – all busy gobbling maximum possible. I hear Red-vented Bulbul. Yes, few are around in bushes and small trees and some arrive at the Peepal as well. Todd has verified the red vent, as well the triangular black crest.  I want to be doubly sure, am I watching white cheeked bulbuls? I could see long curved crest and white cheek as well as coloured vent. Interesting, I have not expected this as well. (Incidentally, later when I consult literature, I realise that this is Red-whiskered Bulbul or Crested Bulbul.)

It’s nine. We need to finish, otherwise we may miss the breakfast, while the birds are enjoy theirs. At the last leg, I show my friends common babblers. I amuse them with the story that they are called seven sisters (Sat Baheni). They are found and go around in a group of about seven birds!

I notice another species of Myna – Brahminy Myna. I show this to friends. Soon, Trip points to a barren pole like stem of a dried tree with few holes at the top end. “Are these some bird’s nests?” Before I form an opinion, a Brahminy too decides to explore the hole and it results in fierce drama. Within split second a Coppersmith emerges and strongly attacks the Brahminy. We notice, Brahminy, a much larger bird, is clearly in shock and meekly flies away and settles on a branch way away from the danger zone. Coppersmith sits on a naked branch, virtually puffing its chest and flexing muscle, telling one and all “I remain hidden in foliage does not mean I am meek. Anybody who dares to come near my nest will have it.” We decide it is better to leave and not get caught in cross-fire.

Birds We See at Zorba